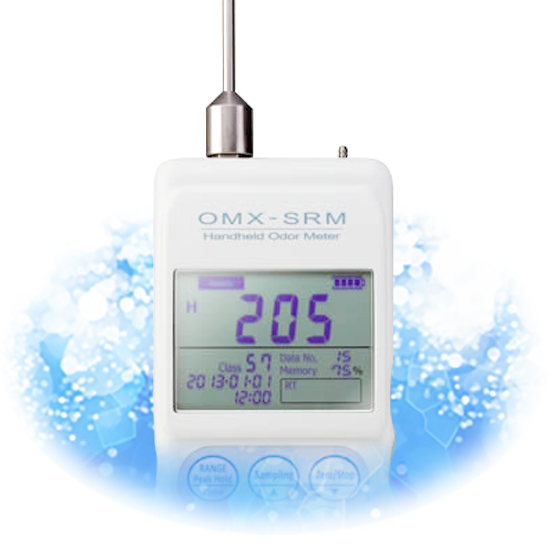 Simply turn on the device and wait for two minutes of warming up. Inner pump starts sucking odor air into the device and odor strength level is displayed on the monitor.

OMX-SRM is suitable for detecting odor in lavatories, measuring smell of cigarettes, medicines, foods and odor from production process.

OMX-SRM is used by cleaning service companies for finding odor occurrence location, checking the effect of deodorization before and after cleaning and deodorizing in lavatories.

Deodorizing effect can only be checked by human sense of smell. It is hard to judge whether the odor is improved or not objectively.

It becomes possible to confirm deodorizing effect with OMX by comparing the change of numeric value before and after cleaning. Also it becomes more efficient that cleaning work can be focused on specific places where OMX shows higher numeric value.

OMX-SRM for measuring smell from lavatory

OMX-SRM is used for measuring odor in hotels and guest houses. It is useful for detecting odor from used towels, sheets, lavatories, kitchen and bathroom, checking the effect of deodorization before and after cleaning.

The deodorizing effect can only be checked by human sense of smell after regular cleaning on amenities like sheet and facilities like bathroom.

Thus, the result could be subjective and largely depending on individual’s feeling.

It becomes possible to grasp the odor and gas concentration in numeric value.
Also by setting up each standard value of order strength, the problem could be solved.

OMX-SRM for measuring odor in hotels

OMX-SRM is used for detecting drainage odor in wastewater treatment plants to improve the environment.

It is requested to check the odor level in an objective way, in order to monitor bad smell from sewage.

It becomes possible to check the odor and record data using odor meter.

Based on the data, further deodorizing measures can be implemented.

OMX-SRM is used for measuring odor in food factories. It is useful for hygiene control and quality control, detecting odor from production process to prevent defective products from entering the market.

It is required to find a better way to make sure if there is any leakage during the packaging.

It becomes easy and accurate using odor meter to find the source by detecting the smell.

OMX-SRM is used by cleaning service providers for checking the effect of deodorization before and after cleaning and deodorizing.

Result of deodorizing can only be checked by human sense of smell.

It is difficult to tell how bad the smoking smells are in smoking room.

It becomes possible to review the deodorizing of smoking smells before and after cleaning.

OMX-SRM is used by pharmacies for detecting odor during compounding medicines. It's useful to manage and control odor level before prescribing medicines for patients.

Odor from medicine can only be checked by human sense of smell.

Thus it is hard to know how much the bad smell from medicine decreased after the treatment.

It becomes possible to quantify the odor which arises on the compounding and the change before and after treatment.

Also, odor meter makes it possible to set a standard on bad smell condition via the numeric value.

OMX-SRM for measuring smell from pharmacy